In the great search for comedic romance anime series, I stumbled across this gem from 2017. How I hadn’t heard of the series before a few weeks ago is baffling but I suppose that other series received a lot more attention at the time. I have a few theories. Anyway, time to discuss the show itself.

When perfectly average gamer Keita Amano strikes up a conversation at a gaming store with the most popular girl at school, secret gamer Karen Tendou, both of their lives will change forever. Over time, their social group expands to Tasuku Uehara, his girlfriend Aguri and eventually Chiaki Hoshinomori. How will the lives of these five school students deal with a crapload of misunderstandings and over-active imaginations? Also, what is up with Chiaki’s younger sister? Seriously, I need to know.

First off, this series uses the hobby of gaming as a setting. Whilst the first episode initially came off as a little forced, I was hooked by the end of the second episode. We see the characters began to show the huge diversity of the gaming community. We see arguments about gaming platforms and genres, as well the more recent debates over DLC, microtransactions and loot boxes. We also see the differences in how people play games, be it casual or hardcore.

Whilst the first episode was a bit weak overall, I was pretty glad that I stuck with it because it was a heck of a lot of fun. Gamers! this is a comedy that relies heavily on characters misunderstanding and overthinking things. We also see some of the humor derived from the gaming lifestyle as well. This promise is delivered in epic fashion without feeling mean-spirited.

The characters in this series were solid overall. They were different from each other without it feeling convenient. The characters also worked well together as a group. The voice casting was pretty damn good as well. For those interested, my favorite character was Aguri, so much so that I think I might just make a new rating system. It is like a normal rating system but I call it Aguris. Not very original, I know, but I must pay tribute to the awesomeness that is Aguri. All hail Aguri!
Plot progression? I think that this series did a good job of showing the relationships of two couples in different stages of their romance. In the case of Tasuka Uehara and Aguri, we see how little Uehara knows about his own girlfriend, who has only had eyes for him since before he became one of the cool guys at school. We also see how even people that don’t necessarily share the same pastimes can often share commonground. Whilst some of the situations faced by the characters are over-the-top, these scenes helped progress storyline and made for an entertaining series. 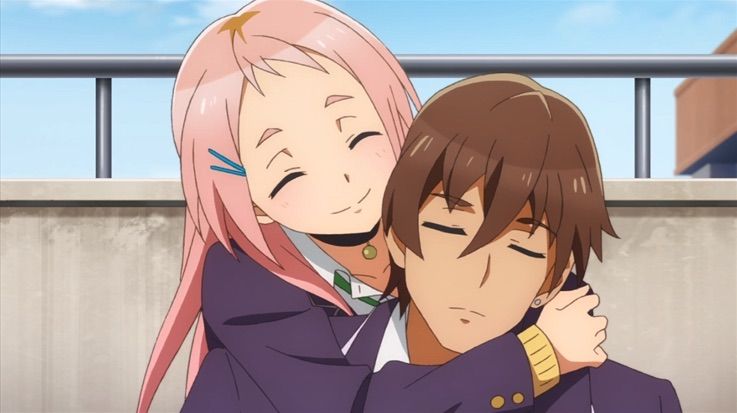 One of the big draws of this series is how the writers made use of mundane situations in amusing ways. Something as simple as playing a board game is run with. The epilogue story dealing with the subject of DLC kicked this idea up a notch, at the same time showing self-awareness that the episode was an epilogue or after story, which is effectively DLC for anime.

BEST OF…
To the best guy and best girl award goes to our male protagonist Keita Amano and pink-haired Aguri. Whilst these two may not have been a couple in the series, they were both adorable idiots that are easy to ship as well because of various conversations. Call this the “Natalie Effect”.

Come to think of it, I wonder how many people have made fanart and/or fanfiction depicting such things, lewd or otherwise… *taps search into google* *eye light up* Well, I’ll be damned… It appears that there is a bunch of fanfiction featuring this ship on sites such as Wattpad.

CONCLUSION
In conclusion, I loved this show. Whilst I had issues with the first episode, I found myself addicted to this silly show in short. I do, however, recommend watching the first few episodes to see if you like the style of comedy and the characters. I give this series 9/10 Aguris. Will watch again!

One thought on “Anime Review: Gamers!”